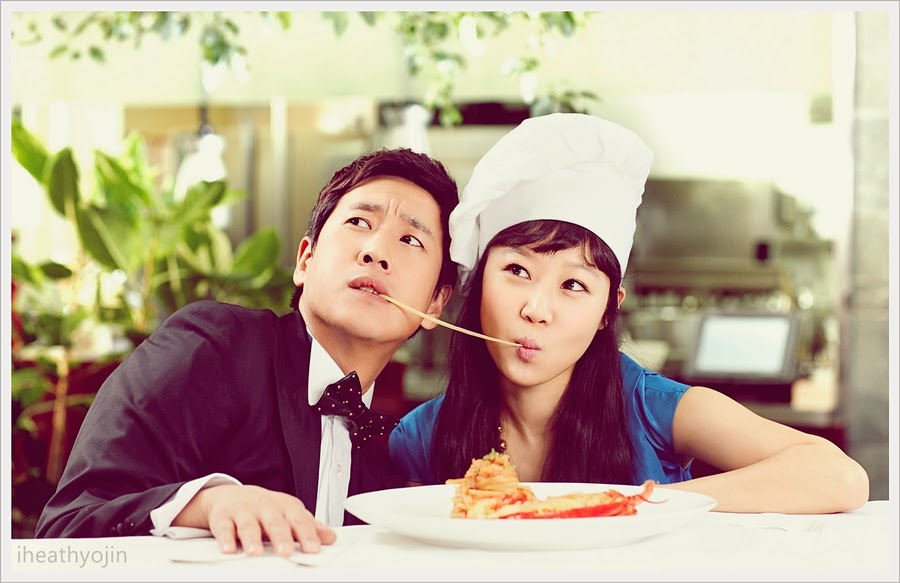 Note: Beck: reporter Beck Una from 10Asia; Lee: actor Lee Sun-gyun.
.
Beck: Unlike the amicable atmosphere we see in “Pasta,” we heard you had to actually work intensively, as if you were almost shooting live.
Lee: Wow, I wanted to die. Really. And I was grateful when our show got extended but me and Hyo-jin were going nuts. We were shooting as if on a live schedule starting with around the seventh episode and from about the ninth episode on, I only slept a total 11 hours during a whole week. I was in a near-panic state too because I was in almost every scene and had so many lines. I would hallucinate and hear my own voice when I lie down after being in shoot for eight hours straight in the beginning. I really wanted to cry sometimes.

Beck: Your character Choi Hyun-wook in “Pasta” was completely different from your character in “The 1st Shop of Coffee Prince” through which you became most publicly known.
Lee: Everyone around me said that character was the closest to the real me. Although I don’t have a disposition that is as screwed up as his. (laugh) But I was at a bit of a loss about what to do in the beginning after receiving the script for “Pasta.” I couldn’t get a picture of what I should do. The Choi Hyun-wook that the scenarist had visioned was an unyielding, stiff soldier-like person but I had felt that he was actually more devilish during the first two episodes. He actually spoke quite a number of funny lines but they were expecting me to say them in a charismatic way so that was a bit frustrating. One thing for sure though, was that if Choi Hyun-wook, if I do not do well, the show would flop. When I look back on the situation it was in, my child was born on the first day of shoot, I had a bit of filming left for director Hong Sang-soo’s movie, I had to learn to cook, I wasn’t sure of my character and yet I didn’t have time. So I was quite sensitive in the beginning. I heard later on that Hyo-jin had been very scared of me. I’m not the friendly type and wasn’t in the mind to approach someone either.

Beck: Well before watching the show, I couldn’t quite picture you and her acting together.
Lee: I heard many people had been against it in the beginning. And once we actually went into shoot, Hyun-wook has a large energy and he is overly expressive so I was expecting Hyo-jin to play her part well too since she had been playing a lot of strong-willed character too. But rather, she took in everything which got me thinking she has a smaller energy than I thought. But when I watched the show on TV, I saw that the balance and pace that Hyo-jin had selected worked well with the drama. Unlike my acting which in the beginning was constrained, I realized that she doesn’t make any unnecessary moves. I realized a lot looking at her. Time-wise, it became much more comfortable to act with her after we got back from Uljin. That’s the first time we talked for a long time and drank. Before that, we just had no time to rest so we hadn’t even been able to eat together. According to Hyo-jin, she had wanted to approach me but felt uncomfortable because I would always give short answers.

Beck: But the characters you two portrayed was done so well that it made me almost think that you two are almost dating. The famous ‘eyelid kiss’ seemed like the producer had kept the camera rolling on purpose. It did well in delivering the fluttery feelings at the beginning of a relationship.
Lee: We had no rehearsal since our shooting schedule was so tight. We hadn’t rehearsed our lines together so we had no idea what would happen. With that scene too, somebody was supposed to cut but the camera kept rolling so I could see Hyo-jin’s face become increasingly red. That’s when we started playing weird jokes and I stared at her without blinking on purpose to make her face grow even more red.

Beck: It seems that after watching “Pasta,” what viewers were thinking of the most was that they want to be in a romantic relationship. And of course, it would cause trouble (laugh) but some people were saying you and Kong might really end up going out.
Lee: Hyo-jin said at the wrap-up party that when she does dramas, she feels that she’s in a relationship and that she’s cheating on her boyfriend, so she hated it a lot when I would show her photographs of my son. (laugh) I myself was showing her sort of an intimacy by showing her those photos though. But I have definitely become more cautious about how I treat actresses now compared to before I was married.

Beck: You, whom we considered the heartthrob of millions of people, got married and became a father right away. That change in your personal life must have been quite an obstacle for your image as an actor who will star in a romantic drama.
Lee: I think “Pasta” was a road I had not taken before. Naturally, I was very scared because it was a path I had not taken before. That’s how much trial and error I ended up having to go through and how tough it was for me. But on the other hand, I became relieved that I think I pulled through somewhat and a bliss that I felt from having opened up another path for myself. I will never be able to forget having worked on this. And I’m very thankful to Hyo-jin.